Patients with atrial fibrillation (AF) are at a higher risk of thrombotic stroke. Therefore treatment with an oral anticoagulant (OAC) has been proven to prevent stroke, however, the bleeding side effect of OAC is the concern for both physicians and patients. Patients’ knowledge of the stroke and bleeding related to AF is lacking in Saudi Arabia. We conducted this study to assess the knowledge of patients on AF related to stroke and bleeding from OAC. Method: this is a cross-sectional study conducted in a tertiary care university center in Riyadh Saudi Arabia. A validated questioner provided to patients or patients’ relatives who were diagnosed as permanent AF on OAC, 15 years of age or older who consented to participate in answering the questionnaire. Results: Of 229 patients analyzed 46% were male and 54% were female; 58.8% in the age of 56-75 years. They were obese and had a sedentary lifestyle. 42% knew AF symptoms, 28.9% knew AF can cause stroke, 39% knew bleeding side effect of OAC and there were no gender differences. Conclusion: This study revealed poor knowledge about AF, stroke, and bleeding side effects, and this mandate urgent strategy for patients’ education in Saudi Arabia.

Oral anticoagulation (OAC) is the mainstay of treatment for thrombotic diseases [1-3] like atrial fibrillation, mechanical cardiac valves, and venous thrombosis. This treatment in case of atrial fibrillation (AF) is for the prevention of serious cerebrovascular events like stroke and at the same time, the same medication carries the risk of bleeding. In the United States, over 6 million patients are treated with anticoagulants [4]. The past decade has seen an increase in anticoagulant consumption worldwide [5]. Worldwide more than 33 million patients had AF [6], and they were at increased risk of morbidity and mortality from bleeding. The balance between thrombo-embolic risk and bleeding risk is of paramount importance at the time of considering the uses of anticoagulation. In the era of new oral anticoagulant (NOAC), it has been proved that the NOAC is less likely to cause bleeding compared to vitamin k antagonists (VKAs) [7-10]. The results of these trials made physicians more likely to prescribed anticoagulation for AF patients, particularly in the absence of the need for monitoring the efficacy of drugs and unnecessary to build up the dose. The physicians have some guidance by using a validated score, CAH2DS2VASc, and HAS-BLED [11, 12] for estimating the thrombotic versus bleeding risk respectively. This knowledge acquired by the medical practitioner may not reach the patients when these drugs prescribed. The knowledge level of AF patients about the risk of thrombosis and risk of bleeding when using oral anticoagulation is not known in Saudi Arabia particularly in the NOAC era. In the previous study from our center, patients’ knowledge of Vitamin K antagonist (VKA) was poor in 80% of cases, and the adherence rate was 53.1% [13]. In this study, we tried to explore the knowledge of AF Saudi patients who were on OAC, about thrombo-embolic and bleeding risk in the NOAC era.

The study setting was a 1500-bed tertiary care university institute. A verbal and paper form questionnaire was given to AF patients in a single center in a university hospital to evaluate their understanding of the importance of lifestyle, AF risk of stroke, symptoms of stroke, and the risk of bleeding with anticoagulation therapy. Each question supplemented with a list of choices to be answered by YES or NO. The study conducted at a university hospital in arrhythmia clinic, the central region of Saudi Arabia. The ethical consideration according to the declaration of Helsinki was verified by the local institutional review board (I.R.B) who approved this non-interventional observational study.

The inclusion criteria were any patients with confirmed permanent AF treated with oral anticoagulation, whatever the etiology that is consented to be part of this cross-sectional study. The medical record number (MRN) obtained from the electronic file, the contact numbers obtained, and used for communications with the patients or Patients' relatives, or patients visiting the clinic or admitted to hospital were included to eliminate bias. The study explained to the patient or patient relatives. Patients refused to consent, younger than 15 years of age or non-Saudi citizens were excluded. Validation of the questioner was confirmed by tow experts, one of them a clinical pharmacist with cardiovascular experience and one consultant electrophysiologist; they piloted 10 patients and found it clear.

The analysis of data was done by utilizing the Statistical Package for Social Sciences (S.P.S.S), version19, software for Windows. A Chi-square test was utilized for analyzing statistically important changes in categorical variables. Two-tailed P values < 0.05 were considered statistically significant.

Our cohort demonstrated high-risk patients as there was more female, older age which well associated with increased risk of AF [14] as well as poor prognosis [15]. This study was similar to the previous study in a single center from Jeddah, in which 43% were male [16] and opposite to another larger study from the central region where 62.4% were male [17] and 59.2% in Tabuk [18]. The sex differences in Saudi probably related to the studies being from a single center and small numbers compare to a large study from the west in which males were more (54%) [19]. Female gender was associated with more complications like cerebrovascular stroke and bleeding risk compared to males [20, 21]. The study also revealed that AF occurred more in old age and that is similar to other studies reported in Saudi Arabia and other parts of the world [16-19].

Smoking is associated with more than the two-fold increase of AF [22]; overall smoking in this study was 23.7%, the majority of them were passive smokers. The smoking habits appeared low but our patients were more likely to deny smoking as it is a stigma in the society particularly in females, and probably it is more than what is reported. A similar study in Jeddah [16] reported that smoking was 21.5% among AF patients and reported less in Tabuk (12.9%) [18].

74.2% of our patients were married; it is comparable to a previous study on Saudi patients using warfarin (69.1%) [23]. However, one public study in Saudi found that unmarried women were more knowledgeable about stroke but 70% of the study group was women [24].

Obesity-associated with an increased incidence of AF [25]; obese patients had a 2.4-fold risk of AF compared to normal weight [26]. Our patients' mean BMI was 31.5, and this was not too far from the gulf safe registry which was the mean BMI of 28±6 [27]. In a Saudi study in Jeddah, the mean BMI was 28.83 [16]. Overweight is one of the few modifiable factors used in AF risk predictors. An old meta-analysis found that the relative risk of an obese person to develop AF was 49% compared to non-obese individuals [28]. In 2016, the WHO reported that 58.5% of Saudi adults were physically inactive [29]. In 2013, the ministry of health in Saudi reported that 60% of the entire Saudi population were physically inactive and it was more in females (75%) [30]. The majority of our cohort (73.8%) were physically inactive, those who were doing some exercise were 26.8%. This may be explained by female predominance. Additionally, these may explain the coexistent of obesity and physical inactivity in this study. WHO in 2010 recommended physical activity as a tool to reduce many risk factors of AF in addition to stroke [31].

Overall, this study revealed poor knowledge about OAC benefits and risk in patients with AF using OAC treatment. The majority of our patients knew the symptoms of a stroke but a small proportion (42%) of them knew that AF is the cause of stroke or TIA. However, patients with previous RIA or stroke have a better knowledge of AF as a cause of stroke and stroke signs and symptoms (Fig. 3). Public interviews in the 6 Gulfs country revealed that 29% knew the term of stroke, the female and the educated individuals knew better [32]. There is a large gap in the knowledge of Saudi patients about the OAC when compare to the European counterparts [19].

In this study Knowledge of bleeding side effect of OAC was similar to the knowledge of thrombo-embolic; only 39% knew the bleeding side effect of OAC, though females were better but not significant (Table 2), which were clearly less than European individuals (54%) [19]. In one study conducted on 1472 visitors of health organizations of Abha southern Saudi, 63.6% and 43.7% recognize thrombosis and hemorrhage as a type of stroke [33]. Even when patients had a good knowledge of anticoagulation they didn’t know the target INR [34].

Saudi AF patients generally are at high risk of both thrombosis and bleeding based upon the study of 264 Saudi patients found by utilizing CHA2DS2VASc, 92% were at very high risk for stroke and by HAS-BLED, the bleeding risk was high in 27.7%, moderate risk of bleeding was 63.3% [35]. The knowledge gap is clearly identified in the patients’ side but also there was a knowledge gap in health provisional, in the physicians side based on study from Taif west of Saudi where 61 (47.3%) physicians reported bleeding from VKA and 10.8% bleeding from NOAC, and only 66% of physicians using NOAC [36]. Additionally, in studies from the eastern province of Saud, 153 pharmacist of home, 63.4 hospital-based, and 31.3% community-based found to have inadequate knowledge and inappropriate practice [37]. This study confirms the poor knowledge of patients for the AF complication and the serious side effect of treatment, requiring urgent campaigns to correct this very important knowledge deficit and to design large scale study from all over the country.

It is in a single-center of a University tertiary center, that did not include other general hospitals or primary care centers. However, patients’ knowledge may be poorer if other center included.

Conflict of interest and disclosure

There are nothings to disclose and no conflict of interest for this study. 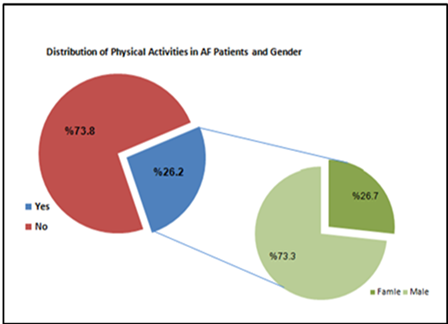 Figure 2. Distribution of Physical Activities in AF Patients and Gender. 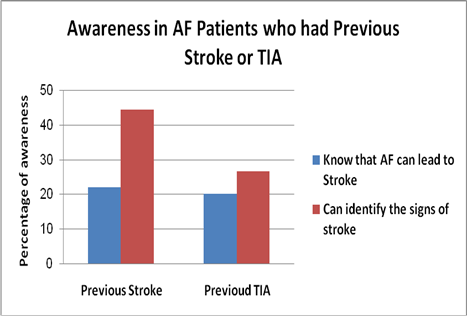 Figure 3. Level of Awareness in A.F patients who previously had T.I.A or Stroke.

Table 1. Patients’ age, total number, and the sex difference in each age group.

Note: No statistically significant association between age and gender (p=0.547).

Table 2. Patient’ age, and the percentage of male and female who know the risk of bleeding for treatment.